Sad news from Venice, where the historic Trabaccolo trading vessel I went to write about for Classic Boat a few years ago has been swamped and damaged by a bad leak. The vessel was saved by the pumps of firefighters who came alongside Il Nuovo Trionfo where she was berthed near the Salute, at the entrance to the Grand Canal. Apparently the boat’s own pumps had failed, though the reasons for the leak in the first place are not clear. The water flooded the engine, and videos show it swilling around at the level of the saloon table top, submerging much equipment.

Firefighters alongside with pumps, St Marks Square in the distance

Il Nuovo Trionfo has now been pumped out and towed to a yard for repairs ashore, where she is now. The engine is being stripped down and parts of it soaked in fresh water in the hope that it can be repaired, and the damage is being assessed, according to Il Nuovo Trionfo’s Facebook group. I have lifted these photographs from Facebook, but there’s much more there, including videos (and Facebook translated the texts quite effectively into English). 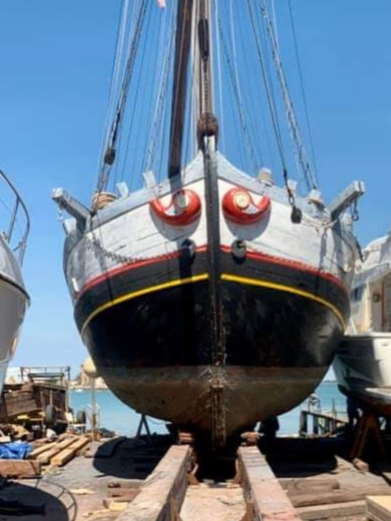 Ashore safely
A Trabaccolo is a sail trading boat which evolved for the northern Adriatic with a flat bottom that can take the ground in the low tides of the lagoons, rather like a Thames barge. Il Nuovo Trionfo had been bought and restored by local enthusiasts, safeguarding a rare nautical treasure, one of very few left. An indication of the design’s seaworthiness is that one has been found in New Caledonia in the Pacific, to which it was sailed after conversion to a yacht, but abandoned after the owner had a heart attack.

The plan for Classic Boat was to write about the Trabaccolo project alongside another in the UK to revive the construction of Thames barges, and to compare and contrast the types of shallow-water trading boat.

I withdrew from the writing commission in the end because yet another huge problem was found with the Nuovo Trionfo – the tree-sized timber keelson running along inside the boat above the full length external keel was found to have a hidden rotten section, which put her out of action again and required another long round of expensive repairs.

The piece for the magazine would have ended up comparing a successful barge project (at the time) with a sad litany of setbacks on the Venetian restoration, making it seem an odd choice for comparison – perhaps rather negative and upsetting for the Venetians, who had gone to a lot of trouble to show me their project and whose successive misfortunes would be starkly obvious because of the inappropriate juxtaposition.

There were other good reasons for visiting Venice, anyway, so it was far from a wasted journey, especially since I met so many interesting Venetian boat enthusiasts and craftspeople. Like all restorations, the Nuovo Trionfo club was continually  short of money from members and well wishers, and was having trouble raising finance from the Venice local government, which at the time was much more interested in building a replica of a 17th century fast postal galley, at great expense. I wish Il Nuovo Trionfo well.

In easier times, I’d now be packing for this year’s Transadriatica race from Venice to Novigrad and back, on Spiuma, Martin’s boat. At least Easyjet has offered me a refund on my  ticket, having just formally cancelled the flight out next week.

Meanwhile, back home this month Cowes Harbour has given permission for yards to launch boats, but an owner is still not allowed to stay on board overnight. There is at least a day’s work to prepare for launching and another day sorting things out afterwards, so with hotels and AirB&Bs closed, the logistics are difficult. We won’t be doing anything for the moment, but will work out a plan.

The government seems to be hinting at another easing of lockdown soon which could make it simpler. The antics of the Prime Minister’s adviser Dominic Cummings in breaking lockdown and not apologising do anyway encorage everyone to think that it is fine to make your own judgments on what’s best to do in grey areas. The ‘don’t stay away from home’ rule does not mention boats, so we could, if we were feeling bloody minded, use the Cummings defence that it’s not specifically banned. (I may be wrong about that, since the RYA and most harbourmasters think it is banned, but there you go….).

However, the real issue is that we want to continue to isolate ourselves, since we are of a certain age and are therefore at greater risk, and that’s what’s holding us back from fitting out and launching for the moment.The other factor is that most ports are still closed to visiting pleasure craft, so  we could not easily carry out our plan to go to the east coast for the rest of the year. For the moment Spring Fever stays where she is.

Meanwhile, the closest I’m coming to sailing is finishing the updates and new material for Pass Your Yachtmaster. I also need to paint the bottom of the little wooden dinghy we row on the pond, the one I built from a kit 6 years ago. I suppose I could also rig a sail with a sheet and a broom handle, though it would take a well cut bedsheet and some nifty short tacking to make ground to windward!

Afloat on the pond, at least

Delighted to be sent this picture of the cup for third in class in the 2017 Transadriatica race, especially since we were the smallest boat and the oldest crew.

Martin Walker received the cup for the race, which was actually last June, at the annual dinner last month of his club, Diporto Velico Veneziano. Spiuma is only 26 feet long and was in a class up to 36 feet and beat much larger yachts. In fact we worked so hard on the overnight spinnaker run back to Venice that several boats 8 or 9 feet longer only caught up with us near the finish when the wind had gone ahead and fallen very light. The crew was just the two of us.

A great weekend, with overnight races to Novigrad in Croatia and back, a dinner in Novigrad, and the next day a vineyard tour, before the second evening start. The pre-race gathering of the fleet in Venice’s Arsenale docks (where the old galleys were built and based) was an unforgettable experience. 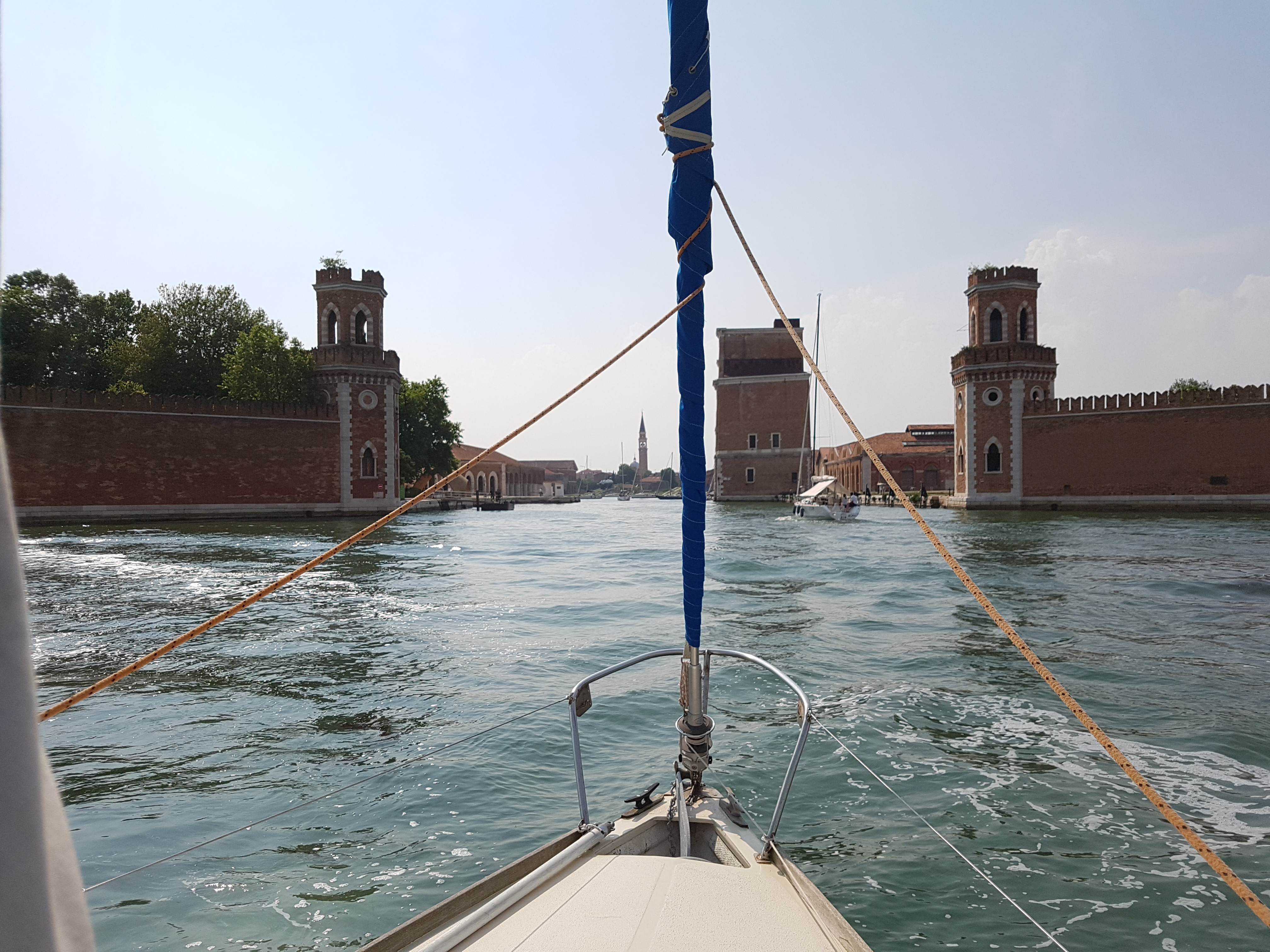 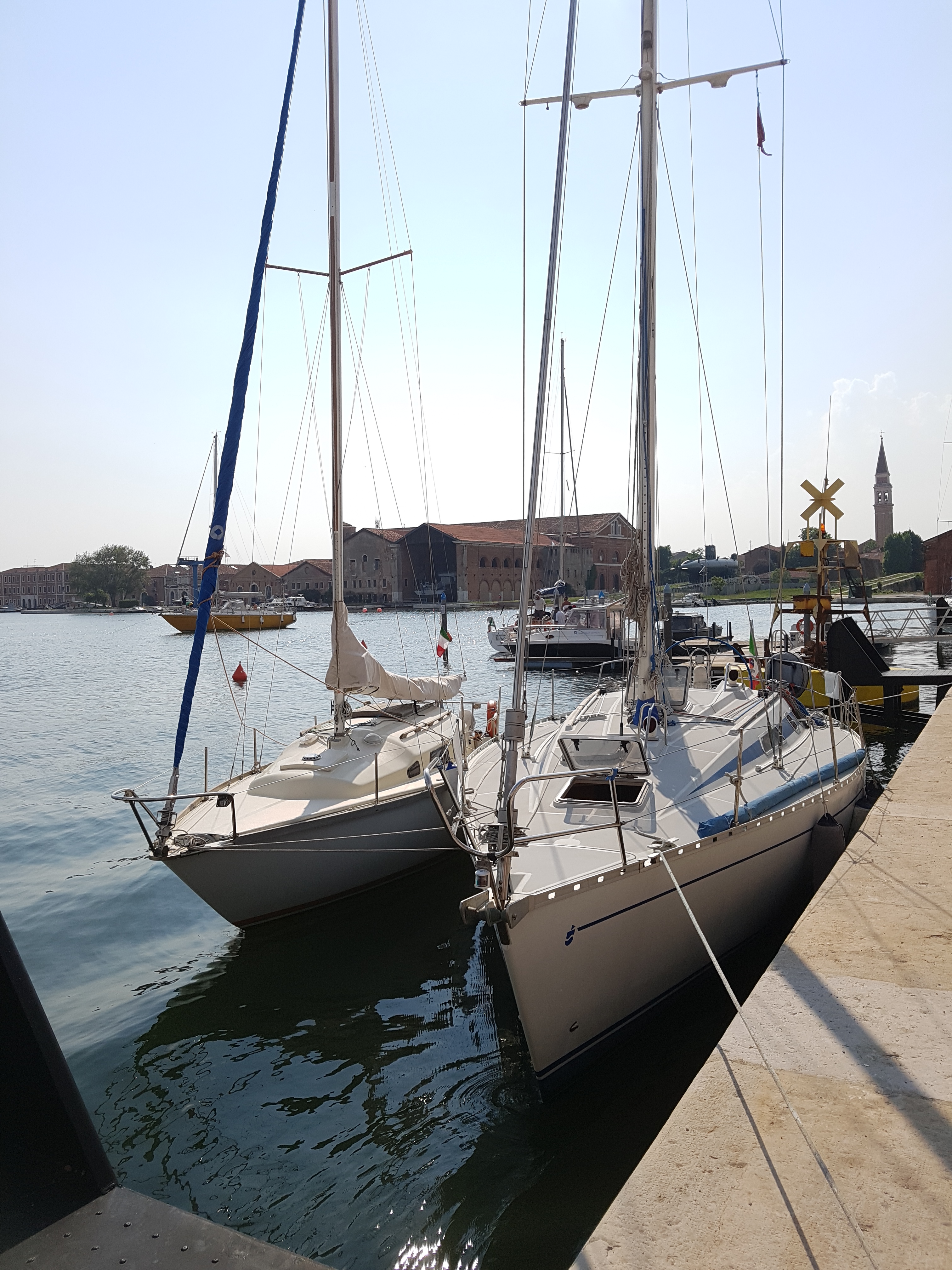 Spiuma is the smaller one. The Arsenale is normally banned for private boats. The pre-race prosecco flowed freely!

A dry dock for galleys inside the Arsenale.

A year ago we went round London by barge, and next week we’ll go round Venice, with the same seven-strong crew. We will start from a barge base at Chioggia, and plan to visit Venice itself and several other islands, including Torcello, and maybe up the River Brenta towards Padua or the Sile towards Treviso. Not sure whether the mobile internet reception is good enough to allow a daily blog, but we’ll load a picture log during the week.