Rainy, grey start, up early but not before the joggers, charging along the towpath at 6.30.

Some curious little places carved out of the Hackney canal bank, such as this tiny terrace under an arch leading to a filled-in basin, seen through rain drenched windows. As we passed the delightful Victoria Park, we saw these ramshackle but pretty back gardens on the other side.

Then we turned down the short Hertford Union, and went along another side of Victoria Park towards the Olympic site. 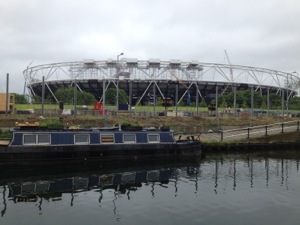 We turned right into the River Lee, where there are cool looking cafes opposite the stadium and a transformed salmon smokery (below), now with a restaurant.

Later, we passed under a piece of engineering that saved uncounted lives by making the city healthier: Bazalgete’s 19th century main sewer, which took (and still takes) London’s waste to be processed at Bacton.

Shortly after we got a glimpse of the match girls’ factory, scene of a famous strike in the 1880s, now an apartment block. 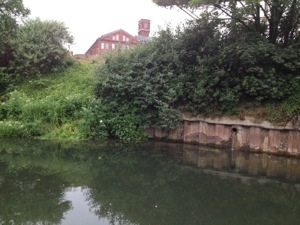 Somewhere near the photo below, we were told, the arch of Euston station was dumped after it was demolished.

Below is Europe’s largest tide mill, part restored, with much original machinery. It is on Three Mills Island and volunteers open it to the public on Sundays.

We reached Bow Lock, which joins the navigation to the tidal River Lee, but rather than take it we turned down Limehouse Link, a short straight canal leading jnto Limehouse Basin,where we will stay the night.

Chris at the helm as we come into Limehouse Basin. We were met by Ian, an engineer from the company that built the barges, and he sorted out the electrical problem that has stopped the lavatories working – great relief, as it were, all round.
Georgia joined us for dinner at The Grapes, a small ancient pub on the river’s edge with a splendid view of the river. The actor Ian McKellen is part owner of the pub.

For once-poisonous industrial backwaters, the London canals have developed into a haven for fish, birds and waterside plants. The most striking thing is the enormous numbers of Coots, with a pair breeding every couple of hundred yards in some parts. In the messier places, and especially the River Lee and the Limehouse cut, they were retrieving all sorts of floating rubbish to build their nests, so they were cleaning the waterway. What is it that makes them so successful in London? Why are they much more numerous than moorhens? Have the bigger coots driven them out?