Several earlier posts covered inaccuracies in charts. Last week I came across yet another example in Cala de Portinax, a bay at the north end of Ibiza in the Balearics. This screen shot from my Navionics chart shows depths in a fair amount of detail: yet the numbers were wrong by a factor of three or four. 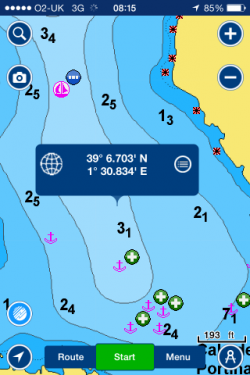 Because of the modest depths shown, we motored in with great trepidation in Olivia Jane, a Beneteau 43 with a 2 metre draft. Yet we found the depths in the middle of the bay were all in the 11-13 metre range and even close in to the rocky shore we anchored in 8 metres. In contrast, the C-Map chart on the cockpit plotter gave no depths at all inside the bay, which is a safer option than mistaken information. We’ve fed this back to Navionics and await a reply, but the nagging question will always remain in future, even if this proves to be a rare mistake: can we trust the inshore information on these charts? What if the mistake had been the other way, showing 11 metres when only 2 metres was there? Do other brands of charts have similar errors? Previous posts on this subject were mainly about errors arising from old surveys; many of these were to do with 19th century measurements of longitude, which become glaringly obvious with GPS. This Navionics chart seems in contrast to suffer from a basic data problem. I’ll update when Navionics replies.

May 14  Here is part of the Navionics reply – they put it right but there is no indication of the frequency of the problem.

Thank you for bringing this issue to our Cartography Department. Navionics appreciates your input and we are pleased to inform you the issue has been corrected. The updated data is currently available for Navionics Mobile by updating your maps.  We have asked to write us from the App, in order to know which App version you were using and you need to update it. Always make sure you are running the most current version of the mobile app.

However, when I went on line, the app told me that no updates were available at this time. Are the above lines just their formula for telling people to go away? The chart of the bay is unchanged.

11 June
finally got the problem of the Navionics chart errors sorted, with help from the company by email. I deleted and reinstalled the whole app and succeeded in getting the updated version, which matched the plotter and our own depth measurements.

Lessons:
(1) one could go on for a long time not knowing that the charts are failing to notify updates via the App Store. So best to ask it regularly to update and if it keeps saying no updates available get in touch with Navionics help, or simply delete and reinstall (after logging on and syncing to avoid losing data). There must be a bug lurking somewhere.

(2) the chart was bought late last year and is still current – so the error was there very recently. There will always be a nagging question in my mind about whether other mistakes are lurking in the charts.

PS Am now looking into why my 2015 edition of Memory Map’s UK charts, which I have on my laptop, does not mark the position of the massive new breakwater at the entrance to Cowes Harbour, my home port. It says in general terms ‘works in progress’ with no position or indication of what. In Navionics’ favour, they show the new breakwater accurately. I have asked Memory Map what the actual cut off date is for its 2015 edition but have had no reply.

For more on this subject, see: