For the last couple of weeks we’ve been pottering around the Channel Islands and the nearby French coast, reminding ourselves what really big tides are like. It’s our very own Bay of Fundy, the place in Canada with the world’s biggest tidal range.

The marina pontoons in St Malo climb the huge posts (below), and the tide outside can still go a few metres lower because the water inside is held back by a sill.

We were in St Malo on Tuesday near neap tides when the range from low to high was 10.6 metres, though by spring tides at the weekend it will be 12.8 metres there and 13.5m at Granville, our last port of call before Jersey, where we are now. At Granville last night the sea receded into the distance over the sand, leaving yachts in the harbour floating behind a sill.

In a Force 4 on the beam on our way from St Malo to Granville we crossed the mouth of the bay of Mont St Michel, with the monastery very clearly visible, an area where the rising tide is said to advance across the sand at the speed of a galloping horse.

It’s all an interesting exercise in planning because the strong tidal streams rotate round the islands in each rise and fall, and no ordinary sailing yacht can make much progress against them, so we go with the flow. In the most famous of the tide races, between Alderney and Cap de la Hague, it can run at up to 13 knots.

This is of course basic knowledge for any south coast of England cruising or offshore racing sailor, but having spent five seasons away, and coming back here with a fresh eye, it is impressive that for thousands of English, Channel Islands and French yachts, these tidal conditions are every day sailing.

We first sailed round the channel islands and north Brittany in 1971, in a scary two week charter from Lymington – scary because we were dinghy sailors out on the high seas for the first time, not realising we had chosen an area with among the most challenging tides in Europe – see Duffers dodging the US Navy

This time we had our own challenge even before we left the Solent when the propellor picked up this tangle of blue rope.

That lump was dragging behind and we got it out with a boathook. The rest was round the prop.

We anchored and waited for 2 knot tide to ease and then Jean-Jacques heroically went down with snorkel and knife to cut it off with our ultra sharp Sabatier bread knife – recommended for this purpose instead of a sailing knife, which was why we bought it. It took him half an hour and multiple dives. By the time I had a go all I had to do was pull the last fragment off because the cutting had all been done: I escaped lightly.

Jean-Jacques thought it only right to give it back to the fishermen from whom it came, though 30 miles away in Weymouth they might have been a bit puzzled. It’s in the bin bag next to the nets. 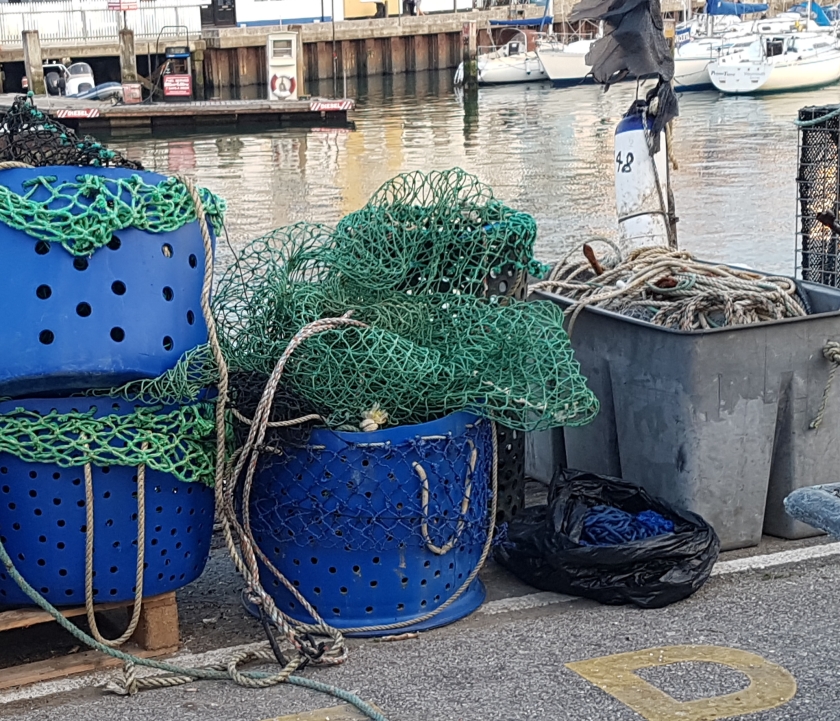