Looking back at Spring Fever’s logbooks recently to pin down the wheres and whens of a good cruising story, I found they were so sparsely written – professional in the best sense, as they should be with a Master Mariner as a co-owner – that I could not begin to tap them as a surrogate diary. And checking my blog posts each year, I see these have been relatively few, with long gaps between them.

So largely for my own benefit I shall start a monthly diary post, in the hope that in another five years I’ll actually be able to work out what we were up to.

November’s most interesting sailing observation was nothing to do with Spring Fever. 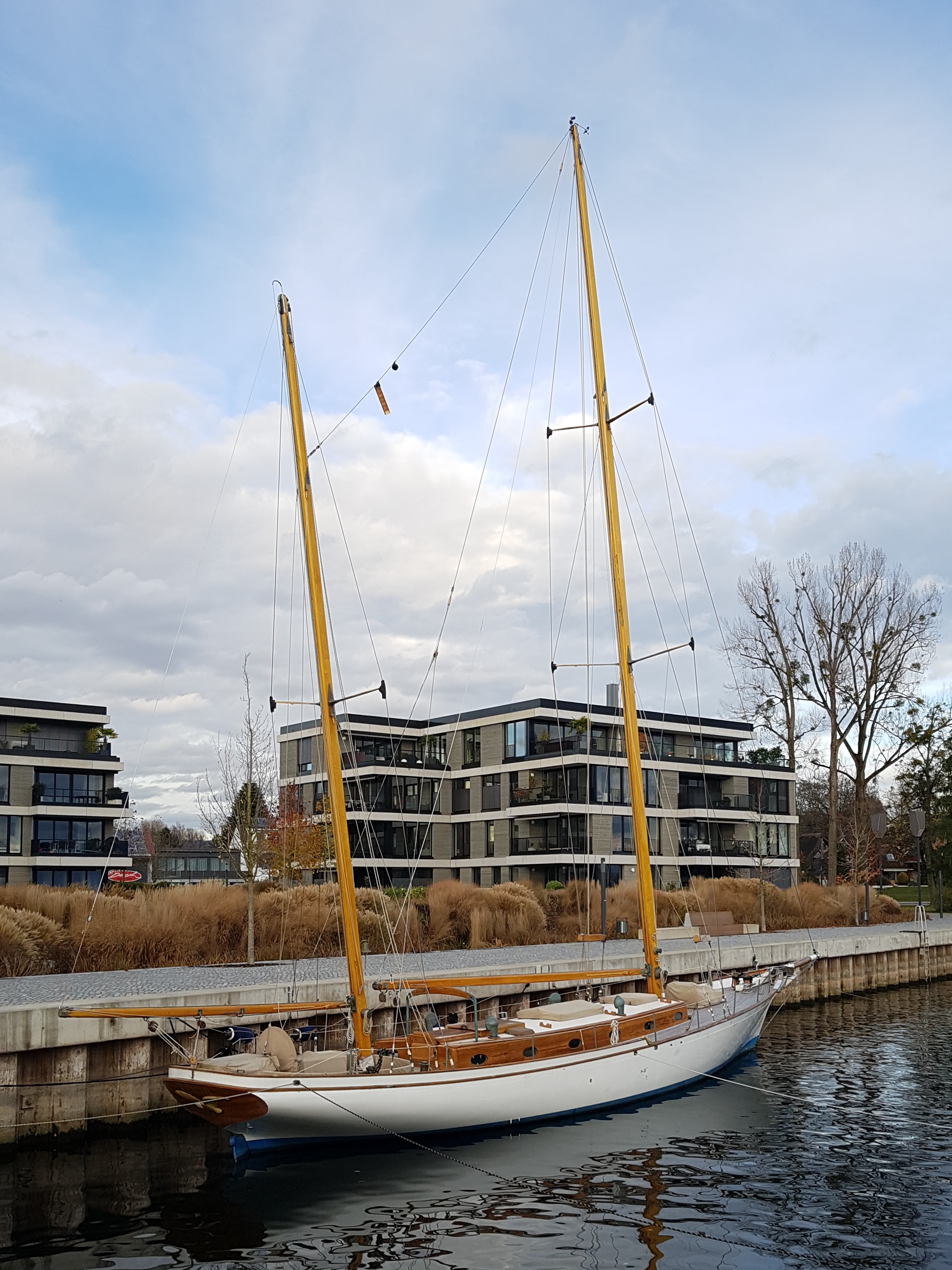 This beautiful 60 foot yacht called Tioga of Hamburg was moored at the end of November at Kressbronn on the German side of the Bodensee, or Lake Constance/Konstanz which is way up the Rhine, near where it starts becoming a mountain river, and well above the navigable section, so cut off from the sea. It is a US  design from 1931 by the great Francis Herreshof, but the original was destroyed and this replica (or so we thought at first from Google) was built in 1988 in Maine and restored in north Germany, where it was recently for sale.

So how on earth did a yacht with those tall masts get to the 38 mile long Bodensee, where Germany, Austria and France meet round the shores? And what on earth would an ocean yacht be used for on a lake where it would take a morning to go from end to end? (A waste of a thoroughbred).

A double check then found a surprising fact: this magnificent yacht is actually yet another copy with the same name, Tioga. It was built in Radolfzell on the Bodensee recently, in 2013, and is for sale for €1.35mn, against a paltry €450,000 for the sea-going 1988 Tioga, which has been cruising the Baltic after crossing from the US.

The question remains: are they really going to sail this lovely wooden yacht just on the Bodensee? If not, how do they get it down the Rhine to the sea? Or do they just stick it on a low loader?

We were actually in Germany on a land yacht of sorts – son Will’s campervan, which had broken down in Austria, and we were on the way home after volunteering to collect it after the lengthy repair. It was fascinating to see how close all the domestic equipment is – including hot and cold water pumps, cooker and gas supply, 12 V wiring, diesel heater, lavatory, shower and bunks – to what you find on a modern cruising yacht.

For Spring Fever, not much happened apart from a decision to winter her ashore from mid-December at the Kingston yard in East Cowes, in reaction to rising costs at our usual Cowes Yacht Haven, which is specialising in the dry sailing of incredibly expensive looking racing boats, whose owners can’t bear dirty bottoms.

We decommissioned Spring Fever on her river pontoon and took the sails, lifejackets etc home, so she is ready to go ashore on 16 December.

This winter we’ve focused so far mainly on sewage! We will finally put in a holding tank after being shamed into it by a massive correspondence on the Cruising Association’s Biscay Forum: I simply posted to ask whether we’d need one for Atlantic Spain, and for some reason it seems yacht owners get more excited in the winter about sewage disposal than any topic other than Brexit. A recent arrival from the US expressed shock and horror to find so many  British boats don’t have tanks. Others deluged us with legal and technical advice.

Tony is boat plumber (I’m electrician) and has visited Tek Tank for a discussion and estimate. We’re finally going to be nice to swim near when we’re anchored in a bay.