Sunny day, light breeze, perfect for a walk along the canal. Loch Crinan and the River Add are a delightful contrast of rocky shore, sandy estuary and saltings, and the woods near Crinan are said to be part of the old Argyll temperate rainforest.

We went back to Poulldabhrain to wait for the tide to get into Loch Feochan, choosing the inside route up Shuna Sound and through Cuan Sound, a narrow and bending short cut, exploring a bit of Loch Melfort on the way as well. One of Bob Bradfield’s charts covers Cuan, and very useful it is. The tide runs so fast (and the boat with it) that it is hard work to identify marks fast enough. 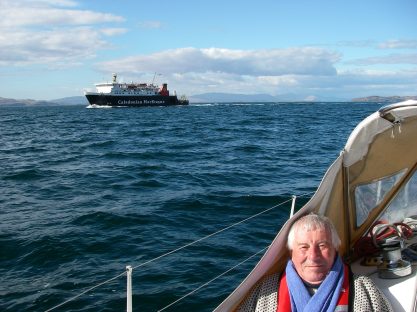 Just enough time in Poulladobhrain for a gin and tonic to relax –  to recover from tracking down which fuse had gone on the instrument power feed, just as we most needed an echo sounder before tackling the Feochan entrance, which is nearby. The tide runs in for four hours and out for eight,  and we went in at two hours after low water as the tide was turning up into the loch. At that point it would already have risen somewhat. We only had 0.6 metres under the keel at one point, which felt a bit tight with rocks nearby.