Rain forecast all morning, so wet weather gear and a stoical attitude called for, with half hour watches steering. It was therefore a pleasant surprise to find that there are no locks until Camden, which we won’t reach until tomorrow. Camden is the end of a 27 mile lock-free stretch before a gradual descent to the Thames at Limehouse.
The best surprise was that far from cruising an industrial wasteland we were actually spending much of the time in a green corridor through London, sheltered by trees, with a profusion of wild flowers, certainly as far as Wembley and Alperton. Even in the industrial and retail parks of the North Circular and further in, there’s a May-time profusion of greenery and flowers along the canal itself.

And what can be more detached from normal London than standing on the boat above the North Circular (did you know there was an aqueduct crossing it near Hangar Lane? I didn’t) watching the traffic below. To complete the drama, there was a flash of lightning and a gigantic crash of thunder as we stopped the boat to take the photo. 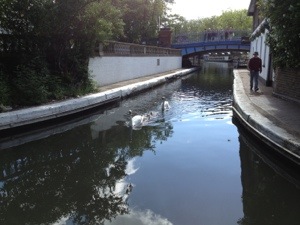 Little Venice: quiet night moored three boats out from the shore, because it is so crowded here – not surprising, because it is so pretty. We ate at an excellent little Lebanese restaurant called Amoul’s Hideaway.
Subtle changes in the neighbourhood with high walls and gates appearing and security guards outside some of the houses. (Russian owners?)